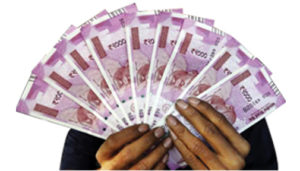 The Centre will most likely announce a hike in the dearness allowance by 2-4 per cent for its 50 lakh employees and 58 lakh pensioners.

Reportedly, the announcement will be made later this month.

Dearness allowance (DA) and dearness relief are offered to employees and pensioners to reduce the impact of inflation on their earnings.

The labour unions, however, are not happy with the proposed hike saying it would not be able to offset the real impact of price rise, reported The Times of India.

The average Consumer Price Index for Industrial Workers (CPI-IW) to be taken into account for raising DA is 4.95 per cent from 1 January  to 31 December, 2017. Since the government has already hiked the dearness allowance by 2 per cent in October last year from 1 July , 2016, it will now raise it further by 2 per cent.

Furthermore, the Centre hikes the allowance taking 12-month average of retail inflation in consideration. The government does not consider the price rise rate beyond a decimal point for deciding the rate of the DA.

Therefore, despite the fact that the hike works out to be 2.95 per cent, the government will ignore the rate of price rise beyond decimal point and increase the DA by 2 per cent.

The DA is paid as proportion of the basic pay of the central government employees.