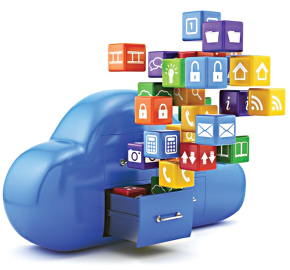 Banking industry is witnessing a paradigm shift due to consistent IT innovations. Over the years, most of the private sector banks have embraced the “anywhere and anytime banking” mode to deliver quality services. With rapid changes in the banking industry, data also needs to be stored in a secured manner. In the traditional data centre, enterprises would manage their storage needs by adding racks of servers. Today, financial institutions can store big data in a much more secured manner, observes Priyanka Sharma of Elets News Network (ENN).

At a time when Internet of Things (IoT), coupled with big data and video analytics, is the talk of the town across the world, making sense of data and its optimum secured storage is the key for the governments including in India. Let’s look at some of the latest data storage options available to financial institutions in the country.

Cloud Storage
Cloud storage is a cloud computing model in which data is stored on remote servers, accessed from the internet, or cloud. A cloud storage service provider operates and manages it through storage servers that are built on virtualisation techniques.

Sensing the big growth opportunities in the cloud market in India, large multinationals are finally putting their data centres in the country, financial institutions are looking to use cloud companies such as Microsoft Azure and Amazon Web Services.

Microsoft has already opened data centres in Mumbai, Pune, and Chennai to get hold of those companies that had been unable to use public cloud services due to rules surrounding data sovereignty.

“We put the data centre in Mumbai mainly to be close to the financial institutions. Now, we are talking to them about Office 365 on the cloud, customer relationship management and disaster recovery. Banks don’t have to build out infrastructure to service peak loads,” a leading business daily quoted Gartenberg as saying recently.

“Public cloud surge is more than the hybrid cloud. The public cloud is on a roll and we want to help the customers to have a better cost manage economy where we have hybrid,” says Amit Mehta, Director-Sales, Emerging Technology Storage Division at DELL EMC, India & SAARC in an exclusive conversation with Elets.

NetApp, an American multinational storage and data management company that recently declared revenues of $5.6 billion for fiscal 2015-16, also wants to capture a bigger pie in India with its top-of-the-line secured data storage and expertise in all-flash array market.

Storage convergence on the hybrid cloud
Hybrid cloud is a cloud computing environment which uses a mix of on-premises, private cloud and third-party, public cloud services with orchestration between the two platforms. According to an IBM report, the hybrid cloud market is growing at an annual compound rate of 29.22% over the period of 2014 to 2019. The transition to hybrid environment will involve tapping storage repositories that span a variety of cloud-based and data centre platforms.

Blockchain
Blockchains are an open, distributed ledger that can record transactions between two parties efficiently and in a verifiable and permanent way. The ledger itself can also be programmed to trigger transactions automatically.

This blockchain-based decentralisation allows developers to store data in a secure, performant, and inexpensive way, spreading it across many nodes. As for security, a blockchain approach means that each file is shredded, encrypted with its own key, and spread across the network until you are ready to use it again. On retrieval, files are decrypted and reassembled seamlessly on the fly.

“I really see this technology picking up in the next five to ten years. It will give a lot of transparency to the end customer and client. It enhances trust between banks also. It reduces time of internal processes,” says K R C Murty, Vice President – Chief Technology Office, Deutsche Bank.

The wide spread of storage infrastructure across many geographical locations and time zones makes the blockchain network very difficult to cripple. Thus, blockchain is considered by some as a democratisation of trust in this digital age.