The basic idea behind the formation of the Agricultural Produce Market Committees (APMCs) is to ensure ‘open auction, exact weight and spot payment’ in cash for agricultural produce of farmers. In an interaction with Elets News Network (ENN), Jitendra Pandya, Director, APMC, Government of Gujarat, says that these Committees play a very useful role for the farmers, as these help them get highly competitive prices for their produce.

Tell us about the existing agricultural marketing system in Gujarat.

How has been the performance of APMCs in Gujarat?

There are 213 APMCs working in the State — 213 principal yards and 187 sub-yards, taking the total number of markets to 400 in the State. Classification of APMCs is done as per their yearly income: those with `70 lakh and above transaction come in Class ‘A’, `40 lakh to `70 lakh in Class ’B’, `20 lakh to `40 lakh in Class ‘C’ and below `20 lakh in class ‘D’. There is an open auction of agricultural produce of the farmers by the licenced traders of APMC. The trader, who makes the highest bid, purchases the agricultural produce. The procedure of auction is managed by an auctioneer of APMC and the goods are weighed on electronic weighing machines, and buyers pay to the farmers in cash. Besides, purchasers also have to pay market cess to the Committee, which is decided by APMCs at the rate of not less than 30 paisa and not more than two rupees for every hundred rupees.

These Committees in the State play a very useful role for the farmers, as these help them get highly competitive prices. APMCs provide many other facilities to the farmers. Many of these provide financial support for agriculture inputs, equipment, drip irrigation etc., while some also do charitable activities.

The primary aim of formation of APMC is to protect the farmers from exploitation of traders and moneylenders. Its main motto is open auction, exact weight and spot payment in cash for of agricultural produce of farmers.

What are the major steps taken by the State Government for the welfare of farmers?

APMCs are working for improvement of the lot of farmers. Since a farmer can understand the problems of farmers better, the State Government recently amended the Agricultural Produce Market Act and made some drastic changes to it, providing that only a farmer become Chairman of an APMC. The State Government has denotified fruits and vegetables from regulated commodities; now trading of fruits and vegetables is fully open in the State. We have also made provisions for private markets for the trading of all kinds of commodities, single levy system, direct purchase from farmer, common licence, farmer consumer market, e-market, contract farming, etc.

What is the dream project of the State Government with regard to marketing of agricultural produce? 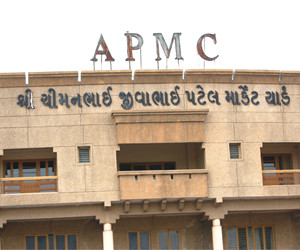 The Government wants to connect all APMCs through computers, so that anybody can know about day-to-day arrival of agricultural produce and their prices. This will help farmers sell their produce as per the real market situation.

The Government has also made provision for 100 warehousing godowns in APMCs in this year’s budget, so that farmers can store their produce in the season and sell when the price is better. They can also get loan on warehouse receipts.

Recently, the Karnataka Government started the concept of a single market in the State. In this system, the whole State is single market and traders of the entire State bid in auction through e-market system. This helps farmers of one State to buy agricultural produce of another State. The Gujarat Government is also thinking to introduce the same concept.

What are the major challenges that APMCs in the State face in their day-to-day functioning?

The Government has made provision for 100 warehousing godowns in APMCs in this year’s budget, so that farmers can store their produce in the season and sell when the price is better

There are many poor farmers in the State, who borrow money from moneylenders before cultivation to purchase seeds, fertilisers and pesticides. They also borrow money for social and religious ceremonies, selling their produce to the lenders.

Besides, due to lack of information, farmers are also not well aware about their agricultural produce that they bring to the market direct from farms. They do not do cleaning, sorting, grading and other similar processes before coming to the market. As a result, they do not get the right price.

In addition to these, there is also not sufficient storage facility in APMCs for the farmers to store their agricultural produce.