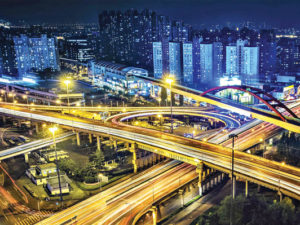 According to Census 2011, about 377 million Indians comprising 31 per cent of the country’s population, live in urban areas. Urban areas are the “engines of economic growth” contributing more than 60 per cent of India’s Gross Domestic Product (GDP). Studies have found that higher urbanisation levels are associated with higher levels of per capita income.

This is also evident in regional patterns of urbanisation in India as seen in higher urbanisation levels in some relatively higher income states such as Tamil Nadu, Maharashtra, Gujarat, etc. Urban population is projected to grow to about 600 million by 2031 (New Climate Economy Report by The Global Commission on the Economy and Climate).

The rapid urbanisation poses several challenges which include improving quality of urban services such as water, sanitation and urban transport; reducing urban poverty; planned development of land resources and curbing spread of slums.

The challenge of managing urbanisation will have to be addressed through a combination of increased investment, strengthening the framework for governance and finance and a comprehensive capacity building programme at all levels of government.High Powered Expert Committee(2011) has estimated investment requirement of  Rs 39.2 lakh crore at 2009-10 prices for urban infrastructure over the 20-year period (2012-31). Municipal bonds are an important way of mobilising financial resources, particularly in the light of limited recourse to budgetary resources due to fiscal constraints.

Typically, Municipal Bonds are of two types – (a) General obligation bonds which carry full faith and credit of the issuing authority, and are appropriate for general services like, roads or street lighting wherein it’s difficult to levy user charges; and (b)Revenue bonds, which are tied to specified sources of revenue from the facilities or services which they finance.

Pooled financing is an important mechanism as it can be undertaken by smaller Urban Local Bodies (ULBs) who are unable to get appropriate credit rating on a stand-alone basis. Under such a scheme, funds raised from bonds are loaned out by the issuers to more than one ULB. Ministry of Urban Development approved the Pooled Finance Development Fund Scheme in 2006. This was done mainly to benefit the smaller and medium-sized ULBs, by providing credit enhancement to them, so that they can access market borrowings on the basis of their credit worthiness through the State-Level-Pooled Finance Mechanism.

In order to have an efficient bond market in place, there is need for capacity building of ULBs in planning capital investments and financial management, including sound accounting and budgeting systems. Further, to strengthen the creditworthiness of ULBs, increased autonomy may be given to ULBs to charge realistic tax rates and user charges for their services. Municipal bonds could be given the status of ‘public securities’ so that they become admissible for statutory liquidity ratio (SLR) investment by commercial banks. The urban infrastructure sector may also be included as a priority sector for the purpose of lending. This is expected to increase the demand for municipal bonds from institutional investors. There is need for further improving transparency and disclosure norms to increase investor confidence. Offer document should disclose all the information regarding the management, administration, financials, operations, projects, revenue generation, risk factors etc. to the public along with the future revenue generating capacity of the ULB. Bond banks may be established which collect all the borrowing needs of municipalities and issue a single class of bond backed by a diversiﬁed portfolio of borrowers. This arrangement reduces investor risk and lowers the borrowing costs of the local governments. Bond banks have been used extensively in Canada and the United States since the 1970s. Developing a secondary market for municipal bonds will allow households or institutions to sell their long-term bonds before maturity. Credit enhancement can help the issuers to market their debt to investors. Municipal development funds (MDFs) that are similar to pooled financing arrangements can be created. Such funds access national bond markets for capital and then lend it on to local governments. Though the municipal bond market is untapped in India, it has a huge potential for fulfilling the massive investment requirement in the urban infrastructure sector wherein the most pertinent challenge will be addressing the non-viability and weak fundamentals of ULBs.